Westminster brought to a halt by Tamil protesters

Distraught supporters of   Sri Lanka's now defeated Tamil Tigers brought the heart of London to a standtill by sitting on the road outside parliament last night.

They flocked to Westminster following the   announcement by the Sri Lankan government that the 27 year old war waged by Tamil seperatists in the north and east of the island was over. Officials also said that Tamil Tigers leader Velupillai Prabhakaran, aged 54, had been killed and showed a body they claimed was his on television.

After midnight, riot police moved in and forcibly removed the demonstrators from the Parliament Square road.

Police said 25 officers were injured in the early hours of this morning and 10 British Tamil protesters arrested as police broke up a demonstration blocking the streets around Westminster.

The violent clashes took place hours after the Sri Lankan government announced victory over the Tamil Tiger rebels and the death of all the main Tiger leadership.

The clashes outside Parliament left three officers requiring hospital treatment, while five protesters were also taken to hospital and more treated at the scene, all for minor injuries, according to the authorities.

The protesters were arrested for public order offences after refusing to move from the roads outside Parliament. Up to 5,000 of them had broken out of the centre of Parliament Square at around 4pm yesterday and brought Westminster to a standstill. They staged a sit-down protest to call for international intervention in Sri Lanka, where thousands of civilians remain in internment camps at the end of the bloody civil war that has claimed 70,000 lives.

This evening the number of protestors in Parliament Square, where they have had a continuous presence since April 6, swelled to more than a thousand. A peaceful vigil and hunger strikes has now escalated into roadblocks police say are illegal on four occasions.

Rangadesch Palasooriyakumar, 29, from Mitcham, south west London, said he had been at the front-line of the clashes.  "Police started pushing us back, and people were falling over each other on the road," he said.  "I saw a couple of heavy words being exchanged between protesters and police. I also saw some sticks and some plastic bottles being thrown at police."

Palasooriyakumar insisted the protest was supposed to be peaceful.  "We don't want to hurt anyone, that is not what our protest is about. People are very frustrated and emotional, many of us have lost relatives in the war zone," he said. 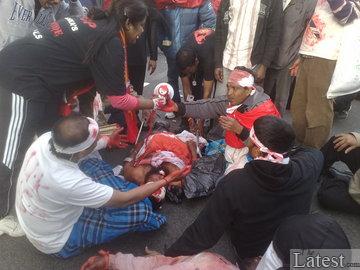 Sivendran Madajrajah, 22, a student also from Mitcham, south London, said:  "People were being hit, kicked and stepped on by police. We had no warning that anything was going to happen until they started pushing us back off the road to Parliament Square. We feel really angry that this is how the British Government is treating us when we are asking them for help."

"There are loads of people who have lost their loved ones in this conflict. They are here to grieve and it is just ridiculous that the police have behaved in this way towards us."

The protestors included many women and children.Yesterday Anupama Velautham, protesting alongside toddlers and an elderly couple, told The Times that she feared for her family in the Vanni region of Sri Lanka, having not heard from in three months.

Velautham, 31, said: "There is no food, no medicine, no UN members  — no one is there," she said. "We want to know what the UN is doing about this. There is no third-party country there. In Kosovo, when people were dying, all the world were there. But whatever is happening in Vanni, no one is listening."

She said that protests and demands for an independent Tamil state would continue. "The Tamil Tigers are our sole representative. It is not going to be over til we get our own nation that is called Tamil Eelam."