What role for Sancho's children? 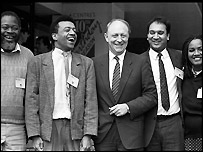 First came the bitter disenchantment of post World War II Afro-Caribbean settlers, and their youth who modelled a “reggae roots” counter-attack on political and cultural racism in Britain. Now the “new Africans” in Parliament may signal the beginning of a radically different outlook.

These high-achievers emerged in the May 2010 national elections. Of the nine Black British parliamentarians, five are newbie’s and all are Africans.

Kwesi Kwarteng (Conservative), a Harvard University history scholar, is a widely consulted financial investment analyst. Sam Gyima (Conservative) is a graduate of top-class schools in Africa and UK universities and hailed by corporate business leaders as an “Entrepreneur of the Future”. They are of British Ghanaian heritage.

The new Africans’ political and cultural outlook owes much to their acceptable character and background. They won the endorsement of their party leaders. They garnered forty to sixty per cent of the votes cast. They were unusually victorious in the suburbs and leafy impenetrable domains of white majority Britons.

Furthermore, they are ideal 21st century candidates trained and anointed for success. They are young-ish, 30-45-year-olds, educated at the best, expensive schools. Their record of accomplishment in politics, business and public services is impeccable.  Moreover, they have the ingrained manners of the British elites: inherently guarded in language with an acute sense of their place in the upper hierarchy of privilege.

However, another set of influences will surely affect the outlook of the new African legislators. Black Africans are re-shaping politics and culture in London, the great multi-cultural, diverse racial and faith metropolis of 7.5 million people. Africans born on the continent and in the UK, mainly Nigerians and Ghanaians, have outstripped the Afro-Caribbean population (5.5 per cent and 4.3 percent of city’s population, respectively, according to research findings of the Greater London Authority, DMAG group).

The new African presence in parliament is matched and influenced by the “high-life” buoyancy on the main streets of deprived areas of south and east London – in Peckham, Hackney, Elephant & Castle, Tottenham, Lewisham and Leytonstone.  Enterprising evangelical church leaders attract 20-30,000 donating parishioners. Furthermore, it will not be long before Yoruba esusu rotating savings clubs emerge. They turn migrant dreams of cultural survival, community development and wealth creation into reality.  In this context, the arrival of the new African parliamentarian is a welcome sign -- as a Nigerian might say: “Ti Oluwa Ni Yio Se, God’s willing has come to pass”

These unprecedented population and cultural forces must give the new Africans in parliament a boost. For instance, in the heart of Chuka Umanna’s constituency in Streatham, London, 23% of the voters are African/Caribbean making it one of the largest Black populations in the country, according to the rights group Operation Black Vote.

Moreover, the boost has positive political and cultural implications for the new parliamentarians. African communities are part of the one-third “minority ethnic population of colour” in London, the political capital of the nation. They share this status with people of African Caribbean, Indian, Pakistani, Bangladeshi, Chinese and Vietnamese heritage. Highly visible and vocal, they are becoming a significant population group and voting public in key parliamentary districts.

The changing culture of Black politics

Consequently, could the new Africans parliamentarians and vibrant communities be the future for Black Britain’s political culture? Perhaps, but they will need to recognise, respect and re-connect with the essential themes of Black History.

Black Britons of Continental African and African Caribbean heritage share a similar experience as pawns in the Great Game of Empire -- they have braved the perils of exodus, migration and struggle in Britain. 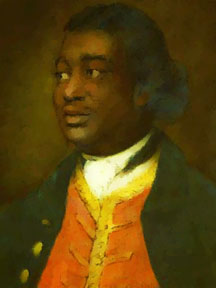 Ignatio Sancho, the 18th century “extraordinary Negro”, understood the need for cultural unity and freedom. The prosperous London grocer and pamphleteer was the first African to vote in British elections. He championed the abolition of slavery in Africa and the rights of all Africans in the Diaspora.

Learie Constantine (1902-71), the first Afro-Caribbean in the House of Lords, fought for the equality of race and culture. Lord David Pitt from Grenada (1913-94) called for workers’ unity against racism. The first Black parliamentarians in modern times, Bernie Grant, Diane Abbott and Paul Boateng, of Guyanese, Jamaican and Ghanaian-Scottish heritage, respectively,  captured the spirit of the riotous times. They swore to serve the interests of the disillusioned Black people who propelled them in to the halls of power in 1987.

Need for a reality check

However, the new African parliamentarians of the 21st century may not express the same devoted commitment as their illustrious African and Afro-Caribbean forebears. They owe allegiance to their suburban middle class electorate and party leaders. Furthermore, much of their outlook on life is informed by their rise to privilege. So many of their closest friends and advisers, inside and outside politics, live in a narrow mono-cultural world.

Yet, inevitably, continuing race-based problems in a divided society will force the new legislators and their mentors in to the equality debate. The statistics belie the nation’s claim to post-racial equality. Almost half of young black people between the ages of 16 and 24 are out of work compared with 20% of young whites. They are miseducated in schools and shamed in the press. They could become, say community workers, a lost, restless and disaffected generation, that could spill over into the type of social unrest that hasn't been seen since the 1980s.

Certainly, the government’s slashing cuts in jobs, pay and services will cast a darkening shadow on the prospects of historically underserved Black people. Patrons and the public will demand action. Therefore, the new African parliamentarians cannot escape the role they will be called to assume in the equality debate. If they are not participants in producing educated, confident skilled, civic-minded Black workers in better jobs with higher wages, they are part of the problem not the solution. How will they respond?

Bolstered by impeccable credentials and emerging Black urbanites, the new African parliamentarians may author a different narrative of Black politics and culture. First, they must learn that speaking up for Blacks, one of the most maligned social groups has not debarred the early rights activist from a rise to influence. Two notable successes in 2010 have proved this. Re-elected Diane Abbott survived 23 years in parliament and was nominated for leadership of the Labour Party. Paul Boateng, who famously declared, “We can never be free in Brent, London (his constituency) until South Africa is free, too”, went on to become a cabinet minister and Lord Boateng of Akyem and Wembley).

Second, they must declare solidarity, across ethnicity and class privilege, and help define the political and cultural future of Black Britain.

Third, and this may be a dream deferred, they should form a cross-party Parliamentary Black Caucus promoting race equality solutions in Britain and development aid in Africa. (This is not as surprising as it sounds. Chuka Umunna has set a precedent as Vice Chair of the Nigeria All-Party Parliamentary Group “to help build dialogue between the two nations [Britain and Nigeria], and support development within Nigeria”).

Launching these initiatives must surely be part of the way forward for the new African parliamentarians.  Their political masters and middle-class white constituents have promised “to eradicate poverty, inequality and racism”. They have pledged for African and Caribbean development. Now the new Africans, in parliament and communities, must create the political culture and power to hold them to it.

* Thomas L Blair is a Black scholar and independent commentator on Black urban affairs at http://www.Chronicleworld.org and http://chronicleworld.wordpress.com; and http://www.thomblair.org.uk This is the eighth instalment in the Black History Month 2009-10 series on the crisis of Black urbanism. It is hailed as essential reading for anyone who wants to chart the present failures and future prospects in the State of Black Britain. Editorial assistance from the editors of http://www.the-latest.com is gratefully acknowledged.

An insult too far...

It's mayhem on London buses