What's the real story behind the Haitian disaster? 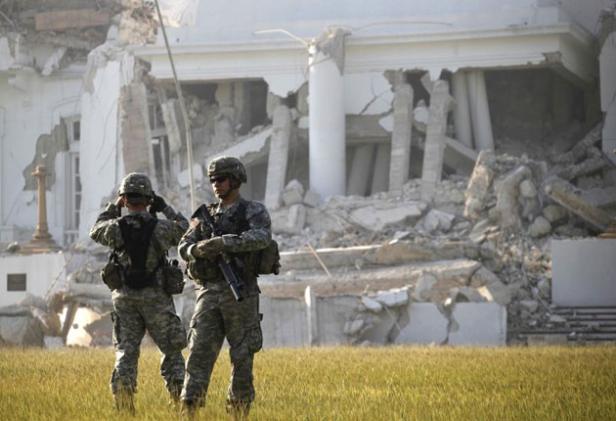 One month since the 7.3 Richter scale earthquake destroyed Port au Prince, the capital of Haiti, there are still news media reports of the world mobilising to help.  But, despite all the millions of dollars that have been raised and sent to the Caribbean island, some survivors still have not benefited from the massive relief effort.

“There is a huge worldwide mobilisation on behalf of Haiti and at the same time you have to juxtapose that with the almost incomprehensible slowness of the aid and rescue effort being hampered  by the landing of US and foreign troops,” said Mario Gousse, a committee member of the United Haitians UK (UHUK), speaking in a personal capacity to City University journalism students in London.

UHUK is a recently formed UK charity, originally set up to sponsor children off the streets of Haiti and into schools.  After the earthquake, the charity has taken on a growing relief operation, raising money to be sent to Haiti and gathering material goods for shipment there.

Gousse said the group had already managed to send a shipload of clothes, food, toiletries and medicine to the country, to be distributed directly to people through partner charities formed by Haitians on the ground.

According to Haitian-born Gousse, aircraft from the charity Medecins Sans Frontieres had been turned away from landing several times at the US-controlled Port au Prince airport, in the immediate aftermath of the disaster. This was purportedly because the Americans were giving priority to the landing of their troops and there was a lack of cooperation between international organisations.

Gousse claimed: “Some rescues haven’t taken place and subsequently, an undetermined number of additional lives have been needlessly lost.”

He asked: "Are Haitian lives less precious than any other?"

Here are some numbers from the little “factbox” of Reuters news agency, updated a month after the earthquake: 212,000 people dead; three million of nine million population affected; one million now living on the streets.  [As of this writing, the number reported by Haitian authorities and news agencies surpasses 230,000].  Although US troop numbers have now decreased from as many as 19,000 to the 13,000 who remain, assigned to Haiti relief.

Gousse said that the US seems to have taken over the country and not necessarily in order to help Haitian interests. “You don’t rescue people with soldiers armed to the teeth," he exclaimed.

Gousse went on: "The reason given is supposedly security but as a Haitian, it feels like a slap across the face because this many troops landing on Haitian soil, to me, constitutes occupation, 1915 style.“

The political situation in Haiti is still confusing although the President Rene Preval and Prime Minister Jean-Max Bellerive have combined their efforts. “But Haiti has not really been allowed to govern itself since the start of the 20th century and even before that,” said Gousse.

He pondered whether or not countries assisting Haiti in the relief effort should first set up their headquarters, to ensure the comfort of their troops, or give the country's authorities the resources they need to carry out their role?

“I fear that the future of my country is to be redesigned in someone else’s image to be made into one big ‘sweat shop’ providing cheap labour for the US and others, and yet nothing even close to a ‘living wage’ for Haitian workers. We are not anybody’s ‘tabula rasa’ (blank slate).   We have our own ideas for the future of our country,” said Gousse.

According to him, the ideal future would include a reconstruction of Haiti, with collaboration between Haitian and international architects, city planners, and civil engineers, but also including reparations from the US and France for specific acts leading to the crippling of Haiti from its liberation as a result of the world's first successful slave revolt  in 1804 to the present day.

Gousse said it seemed that Haiti has been born in struggle and now the country must struggle for attention in order for the rebuilding of the country to continue to be of interest to the rest of the world.

So for once, it would be great to keep our eyes open on a population who have always been fighting for their life and humanity, instead of flicking through to another channel.