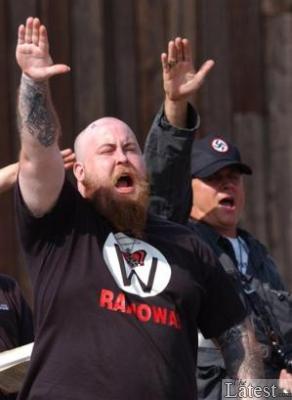 It seems that some people with views like or similar to white supremacist David Duke, in an essay written during the American Democratic and Republican party primary election season, are in the odd position of allegedly not being too adverse to a win by the Democratic presumptive presidential nominee, Senator Barack Obama.

As it has been previously stated, it is hoped that the senator serves as a 'visual aid' to rally more white people to action to reclaim 'their' country.

It is being reported that this is a widely held belief and hope among White supremacists, estimated to be around 200,000 nationwide, by organizations that monitor the activity of such groups.

"Some 150,000 to 200,000 people subscribe to racist publications, attend their marches and rallies, and donate money. Approximately 100 hatelines are in operation, with recorded messages that propagandise the caller with hate-motivated speeches and publicise upcoming meetings and rallies. Because of their increasingly sophisticated use of the media and electronic technology, there are 150 independent racist radio and television shows that air weekly and reach hundreds of thousands of sympathisers."

Recently, in an interview from his home, the Mississippi organiser of a White separatist anti Dr. Martin Luther King Day march earlier this year in January 2008 in Jena, Louisiana, Robert Barrett, formerly of New York, discussed his views regarding what he calls the "so-called" civil rights bill and a hoped for realisation that it needs some "tweaking".

On the other side of that coin, however, the internet blogs of white supremacist sites have been filled with calls for the death of Senator Obama.
An interview, aired by FOXNews, was conducted with the Grand Wizard of the National Knights of the Ku Klux Klan International, where he discussed his views about a possible assassination of Senator Barack Obama.
From an article titled, America Burning: Racists Say Obama Must Die, posted by Scotsman.com:
John W Hickenlooper, the Democrat Mayor of Denver (the host city, in Colorado, for the Democratic National Convention beginning August 25, when Senator Obama was officially named the Democratic nominee for President of the United States), confirmed that he was aware of threats against Obama from white supremacists and other racist groups.

He added that the Denver Police Department was working closely with the Federal Bureau of Investigation and the Secret Service. He said: "We are looking at every possibility and making sure that we have prepared for every conceivable contingency. If someone is threatening violence we will go to great lengths to deal with that."

The Federal Bureau of Investigation (FBI) has released an unclassified 14 page report, dated July 2008, entitled, White Supremacist Recruitment of Military Personnel Since 9/11, detailing increased activity in the Armed Forces, with the report stating:

Sensitive and reliable source reporting indicates supremacist leaders are encouraging followers who lack documented histories of neo-Nazi activity and overt racist insignia such as tattoos to infiltrate the military as  'ghost skins,' in order to recruit and receive training for the benefit of the extremist movement.

This report has been released to law enforcement agencies nationwide.

Please click here for a link to a transcript of an interview with former FBI undercover agent Mike German, who infiltrated white supremacist skinhead and anti-government militia groups.

Britain has the highest drug deaths in Europe