Shocking figures released by the Office of National Statistics (ONS) this month show that Black people are dying at an alarming rate from Covid-19 or coronavirus that has devastated lives in the UK and around the world.

African Caribbeans in Britain have been killed by Covid-19 at a rate that is four times more than white people. And Bangladeshis and Pakistanis are more than 50 per cent more likely to die from the virus as white people, with people of Indian and mixed heritage also more at risk, according to the ONS.

National organisation Grassroots Black Left (GBL) where I am co-chair with Cllr Hassan Ahmed has produced a position paper to outline our alarm at the number of Black fatalities, including those doing their job caring for the sick and elderly. It makes demands of the criminally negligent Tory government and Keir Starmer’s feeble Opposition.

We believe Black political unity is essential to tackling the crisis and are planning a conference to bring groups together. Our position paper, sent to all Black MPs and NEC members, sets out published facts about the coronavirus pandemic and how it has hit hardest Britain’s Black communities. It tackles head-on some of the controversies surrounding the issue.

Racism and Coronavirus in the UK

The Black African, Caribbean and Asian faces on front pages of newspapers at the beginning of the pandemic said it all, although the racial dimension was not referred to by most media and politicians at the time.
Of the 119 coronavirus deaths of NHS employees as of last month, an appalling sixty-three percent were African, Caribbean and Asian, according to a report in the Health Service Journal on April 22. Experts at the ONS say these stark racial differences are partly down to Black people being more likely to live in poor areas of the country and to do public-facing jobs that put them at risk.

African, Caribbean and Asian NHS employees, and others in public service employment, including transport, are concentrated in the lowest paid and most precarious jobs, and most likely to be subjected to disciplinary action by their white bosses.
ONS Head of Health Analysis Nick Stripe said: “The risk [of getting Covid-19] is significantly higher for some of those ethnic groupings compared to the white ethnic grouping.”

The ONS warned that Black people were also the hardest-hit section of the population because of higher health risk factors including diabetes, high blood pressure and heart disease in their communities. But the experts accept: “A remaining part of the difference has not yet been explained.”

Inequalities within Black communities are well-documented, such as in a recent report produced by the Runnymede Trust think tank. Racist abuse has always been a feature in the NHS, with a report in October 2019 showing it had almost tripled.
This coincided with the implementation of the government’s racist ‘hostile environment’ policies against migrants, asylum seekers and refugees that interfered with the very socialist foundations on which the NHS was built: healthcare for all, free at the point of delivery, based on clinical need and not on the ability to pay. 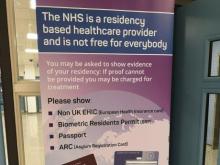 The government’s discredited hostile environment policy will lead to vulnerable migrants being “too scared to seek medical help because they live in a country where hostility courses through the veins of our basic services,” as scholar Maya Goodfellow argues.

There should be no barrier to migrant and undocumented people being able to get free healthcare in the UK and work in the NHS, so it’s right the government did a U-turn and removed the annual surcharge in the face of opposition that included some Tory MPs. But the Government’s appalling detention centres for migrant should also be immediately closed.

There is also an urgent need for a vaccine to defeat Covid-19. But here, too, we see evidence of racism. Many were shocked by the appalling statements by Dr. Jean-Paul Mira, Head of the Intensive Care Unit at the Cochin Hospital in Paris, calling for the testing of potential vaccines in Africa.

“A little bit like it’s been done for certain AIDS studies,” he said, “where among prostitutes, we try things, because we know they are highly exposed and do not protect themselves?” Due to a public outcry sparked by the overt racism underpinning his statement, Dr. Mira was forced to apologise.

But even the notion that such studies should be done in Africa or anywhere else where the safety of human beings cannot be guaranteed through the provision of personal protective equipment (PPE), adequate public health measures and intensive care facilities must be ruled out in the strongest terms.

There have been calls for urgent government action, not least because Black people account for 33 per cent of all Covid-19 patients in intensive care. The staggering racial inequalities led to the government launching an official inquiry to explain the reasons and come up with answers.

The credibility of the government’s “independent” inquiry into the disproportionate effect of Covid-19 on Black communities has come into question, however after concerns were raised about the role of the former chair of the Equalities and Human Rights Commission, Trevor Phillips, and his private consultancy company.

In past controversial media interventions, Phillips has made divisive comments about Muslims, for which he has been suspended as a member of the Labour Party, and he has under-played the effects racism has had on Black people in Britain. We propose a truly independent inquiry by experts drawn from the Black communities.

While we welcome Labour’s announcement that it is launching its own independent inquiry, in order for the Black communities to have confidence in it, GBL demands that the party’s African, Caribbean and Asian Labour membership should be:

Within Labour, the bombshell leaked report about its handling of antisemitism complaints confirms what many Black members have known for a long time about the institutional racism and hostility to them they have historically faced in the party, which counts Africans, Caribbeans and Asians as its most loyal voters.

The newly-elected Labour leadership can have a big say in leading the national Covid-19 debate. Keir Starmer should not shy away from going on the political offensive on behalf of the public and supporting trade unions resisting a Tory return to work without adequate safety measures being in place.

The Labour leader has an open goal as a result of Boris Johnson’s slow response to Covid-19, which has caused thousands of unnecessary deaths. Every day the government should be attacked for its shocking failures resulting in Britain having the highest numbers of deaths from the disease in Europe and the second highest in the world.

Grassroots Black Left joins other campaigners demanding adequate personal protective equipment and medical resources for health workers and carers, including in much-neglected care homes, where many Black people work. We also support disabled people in their too often forgotten fight for justice.

Other key sections of the GBL paper include the impact of coronavirus on mental health grieving, and the disturbing rise in reported incidents of domestic abuse, issues raised by teachers’ and other unions as well as the impact on the voluntary sector.
As Black commentator Nels Abbey, a former Voice newspaper columnist, said in The Independent:

“The shameful Black death rate disparity shows that post-Covid, we have to get serious about equality, justice and diversity at all levels of British society… Never again must any British ethnic group be left vulnerable. And never again should any group be dismissed for speaking up.”

*The Grassroots Black Left report on Covid-19 and Black people can be read here:  https://bit.ly/2LlVudt