Why there's a credit crunch 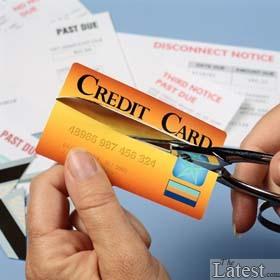 US president George Bush has sparked uproar by demanding that Congress launch a $700bn bail out package funded by taxpayers for financial institutions - many of whom back his Republican party. Shahid Miah, an expert on global economies, gives The-Latest his view.

America's treasury secretary Henry Paulson has finally admitted that there is a crisis in the financial services. It has taken him a while to make such an admission but that is probably more to do with justifying public intervention into the most profitable sector in the economy, than giving an unintentional impression that may bring further discomfort to investors in the stock markets.

The last few months saw the worse economic meltdown in the financial services since 1929 when the stock markets crashed in the US that led to the Great Depression. During that grim period, panic spread across the world and every major economy was affected, particularly in Europe where many countries had not fully recovered from the aftermath of the First World War.

In Germany, for example, the economic turmoil resulted in social dislocation and contributed to the rise of Adolf Hitler in the 1930s. Politicians, economic historians and economists have disagreed over the causes of the Great Depression, but certain causative factors are generally accepted. The prosperity of the 1920s was unevenly distributed among the various sections of the American economy, whereby farmers and unskilled workers were notably excluded.

This led to the nation's productive capacity being greater to that of its capacity to consume. In addition, the tariff, isolationist and war-debt policies of the Republican administrations of the 1920s had cut down the foreign market for American goods. Finally, 'easy money' policies led to an extravagant expansion of credit, instalment buying and extraordinary speculations in the stock market. This resonates with what is happening today.

Unlike the 1930s, we will not see 16 million people unemployed in the US and Gross Domestic Product declining from $104bn to $56bn within a year, as it did in the 1920s, but society as a whole will be affected which should not be undermined, underestimated or ignored. 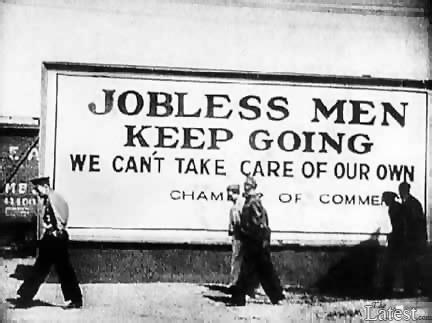 The Great Depression is the severe economic crisis precipitated by the US stock-market crash of 1929. Although it shared the basic characteristics of other such crises, the financial crsis was unprecedented in its length and in the wholesale poverty and tragedy it inflicted on society.

In August 2007, when the credit crunch began, the European Central Bank and the US Federal Reserve injected $90bn ( £45bn) into jittery financial markets. The British prime minister Gordon Brown said Britain was in  "as good a shape as it could be to weather the storm". But it turned out somewhat differently than he expected. One year on, house prices continue to fall at their fastest rate on record, consumer and investor confidence is at an all-time low, and there is a looming recession.

Economic optimists were telling the British Chancellor Alistair Darling that the markets would start to pick up in the first fiscal quarter of 2008, or at worst in the second. Darling however, took a more pessimistic view. But even he has been surprised by the length, depth and breadth of the crisis saying that nobody in the world has expected the seizing up of the markets in August last year to have such profound consequences.

Years leading up to August 2007 had seen the development of new and sophisticated ways for the financial markets to make, and, lose money. Consumers in the US and Britain were living beyond their means, borrowing money to buy houses and funding their spending habits. Asset prices, particularly the cost of homes, rose rapidly, presenting insurmountable problems for first-time home buyers.

Banks tried to solve this issue by relaxing criteria for granting a mortgage whereby they bundled up poor-quality mortgages with good-quality ones, and then sold the packages of debt in a process known as securitisation. By the summer of 2007, money raised through securitisation was funding more than half of Britain's home mortgages.

By last summer, it was clear that the housing market in the US was going to plummet and the mortgage-backed securities were worth a lot less than anyone could possibly imagine. Nobody was sure how big the losses might eventually be, and so the markets abruptly lost the two ingredients that were vital to keep them vibrant  — confidence and trust. At first, banks stopped lending to one another, and then they sought to repair their finances by cutting back on lending to their customers. Borrowing became harder to arrange and more expensive.

The second big problem was that Britain, the US and other countries in the world, were fighting a war on two fronts. They were wrestling the credit crunch on one hand, and rising inflation on the other. My illustration below demonstrates this.

Banks lent money without properly checking the credentials of the home buyer. And when the home buyer could not afford to pay back the mortgage, banks stopped mortgages and stopped lending to each other increasing interests in the process.

The affects of the credit crunch has already spread into the economy at large. The Bank of England and the US Federal Reserve say the affects are still unfolding, and they see their job now is to re-shape the financial regulatory system and bring confidence back into the markets. Paulson announced the injection of $700bn to the US financial services sector (which is currently going through Congress), and is encouraging other Governments to do something similar.

But why should governments bail-out a sector that is immensely profitable which many people will deem it to be made up of greed, deception and irresponsibility? (My few liberal anti-capitalist friends would be amused at their demise up to this point.)

The answer is simple. The financial services sector employers over 25.3 million people, contributes  £96.9bn to the UK economy and has supply chain linkages with many sectors. In London, the sector employers 554,000 people, is worth  £39.2bn and the estimated local purchases and sales equate to  £30.2bn and  £18.9bn respectively.

The economic value of the sector is immense. It buys from a lot of industries such as creative industries, professional services and transport, and sells on to many as well.

Mortgage lenders were bailed out by the British and US governments. In the UK, Northern Rock was saved with taxpayers' money in 2007. The US Government did the same for Bear Sterns, Fanny May, Freddie Mac and AIG this year.

When there is a sector that is so important to the economy, it is in the public interest to see it survive, and that is where the market failure scenario and justification for government intervention comes in.

Governments or any public agency should intervene in the economy when there is a market failure, in other words, when the market is not efficient and its demise will affect the public and society as a whole.

Economists will argue over the causes of market failure and at which points should government intervene to correct it, but I think on this occasion, they will agree the bail-outs by the UK and US governments were justified given this extraordinary circumstance, even if the timing of those interventions are debatable.

* For a longer version of this blog contact the author: shahid@shahidmiah.com