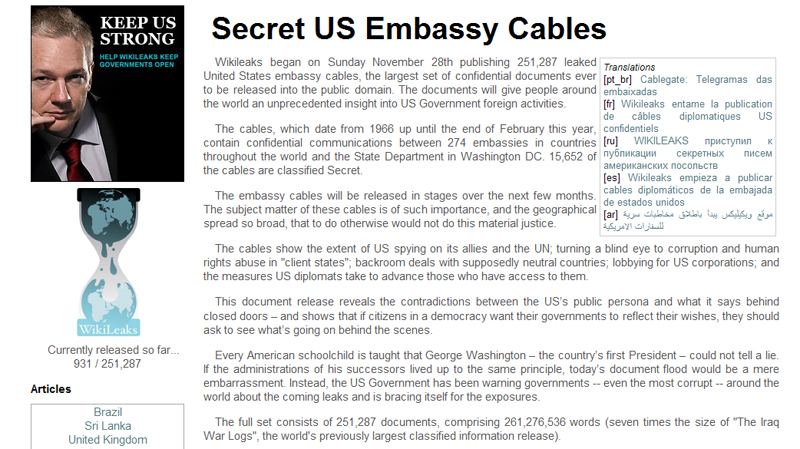 Financial journalist Nick Kochan explains that whoever is masterminding the economic suffocation of Wikileaks is using the same tactics as those who target terrorist groups.


Wikileaks’ publication of sensitive diplomatic correspondence has been greeted by a concerted economic attack on its site, on its servers, and one can imagine on its founder Julian Assange. The decision by Amazon to cease to allow its server to carry Wikileaks has been followed by boycotts by credit card companies, banks and other key parts of the site’s infrastructure. The ferocity of the clampdown can have no other goal than to starve the site of oxygen and ultimately close it.

Whoever it is that is masterminding the economic suffocation of the site, one thing is clear. They learnt their lessons at the feet of those who wage economic wars on terrorist groups and the like. The wars on terrorists are more covert of course: we hear nothing about them, until a drone lands a bomb on an Al Qaida stronghold in Waziristan. But the principle is still applicable. They start with the closure of their access to funds and their access to publicity.

The authorities investigate the routes that terrorist money takes through the financial system by enlisting the support of banks worldwide. One can imagine the funders and supporters of Wikileaks are being investigated in the same way.

The authorities will go to the banks used by its supporters and its managers, demanding (if necessary by legal but undisclosed means) access to bank accounts. That way they will trace funds back to their sources. Banks will be obliged to hand over this documentation, or face a showdown with local regulators and powerful political groups. This hunt for funds and names will have started some time ago.

Such an asset tracing and asset confiscation exercise will never be disclosed. But its impact on the many well-meaning people backing the site will be traumatic. The authorities could yet use a further repressive measure with respect to the individual supporters. They could put them on blacklists, which banks are required to check before opening an account. Banks are also required to consult these lists before handling funds from so called politically exposed persons.

In short, what is now most likely taking place is the undercover pursuit of supporters of the website, outside the processes of public disclosure.  Such a hunt takes places routinely when a terrorist suspicion is aroused. It does not happen when legally-operating institutions in civil society have incurred the wrath of administrative structures.

What remedies does the website have at its disposal? The answer must be very little. While one must speculate that there is a coordinated move between international police to repress the site, it seems unlikely that there is a document trail proving a breach of human rights. It is not totally out the question, however.

What we are undoubtedly seeing is a form of coercion used in former Soviet Union countries to drive out a competitor, and it may be that the Wikileaks site can allege cartelisation by the financial powerhouses now refusing to deal with it. What is absolutely clear is that the economic boycott of a web participant takes internet law into new, and very scary, territory.

*Nick Kochan is the author of The Washing Machine, an acclaimed analysis of money laundering and terrorist financing.
Submitted by Newsdesk on Sun, 12/12/2010 - 21:58
Category:
Politics