Time magazine has again turned to a concept for its latest person of the year, choosing "The Protester”.

This is in recognition of a year in which unhappiness with politics and the economy was given voice in streets around the world, most notably in the Middle East.

“Is there a global tipping point for frustration,” asked the magazine’s top editor Rick Stengel in a statement today. He appeared on several morning talk shows to push the same theme.

“Everywhere, it seems, people said they’d had enough,” Stengel stated. “They dissented; they demanded; they did not despair, even when the answers came back in a cloud of tear gas or a hail of bullets. They literally embodied the idea that individual action can bring collective, colossal change. And although it was understood differently in different places, the idea of democracy was present in every gathering.”

Time picked its first person of the year, then called man of the year, in 1927 with Charles Lindberg, who put aviation on the map. In the years since, it has chosen the good, Mohandas Gandhi in 1930; the bad, Adolf Hitler in 1938; and even the ugly, the computer in 1982. Responding to the Cold War, the magazine praised Hungarian freedom fighters in 1958, and its thematic ideas have included Baby Boomers in 1966 and Middle America in 1969.

The selections carry with them a certain amount of self-promotion for the magazine. The choices (like the ubiquitous 10 best lists also entering their busy season) could help boost circulation as well as the prestige of the designee and the institution making the award.

Still, such recognition represents a milestone that - in this case - highlights the role of the year's protests and their meaning. 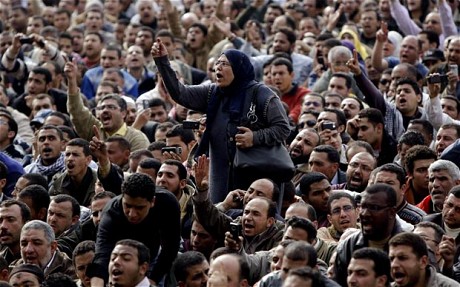 This year was hardly the first in which crowds of people took to the streets. Indeed, the Quaker adage of speaking truth to power is at least 60 years old in its word formula and centuries, if not millennia old, in its spirit. There were food riots in the ancient world, slave rebellions in Roman times and the occasional revolution, peaceful or not, since the 1700s.

Given how nasty, brutish and short human lives have been over the eons, it may be more of a wonder that there have been so few revolutions. And that goes to one of the points that magazine writer Kurt Anderson makes in his argument for the protester selection.

“Massive and effective street protest” according to Anderson, “was a global oxymoron until - suddenly, shockingly - starting exactly a year ago, it became the defining trope of our times. And the protester, once again, became a maker of history.”

Anderson adds: “The stakes are very different in different places. In North America and Europe, there are no dictators, and dissidents don’t get tortured. Any day that Tunisians, Egyptians or Syrians occupy streets and squares, they know that some of them might be beaten or shot, not just pepper-sprayed or flex-cuffed. The protesters in the Middle East and North Africa are literally dying to get political systems that roughly resemble the ones that seem intolerably undemocratic to protesters in Madrid, Athens, London and New York City.”

From humble beginnings by a Tunisian 26-year-old street vendor named Mohamed Bouazizi, 2011's protests came after an extended period of relative calm and stability in much of the world. The Middle East was the centrepiece of the year’s protests, with the Arab spring's results still being felt across the region.

But the so-called year of protests raises some questions: Why in 2011? And, what are the lessons to be learned from protests?

Part of the answer to the "why in 2011" question can be traced to the ever-more-difficult economy worldwide, which has been shutting off options for many people since the financial meltdown in the West.

Much of the world has been too poor to afford more than bare necessities (and many people can't afford even that), but mass communications have increased expectations and hopes, which are then often dashed by weak governments unable to deliver better lives. That has led to a growing disenchantment in many political systems, according to polls.

For example, China's Tiananmen Square protests of 1989 were crushed, with the Communist Party adapting to the peoples’ anger and maintaining power - unlike the Communist Party of Russia, which was swept into the dustbin of history. Recent protests in Iran have been fruitless in forcing government change though it was mass demonstrations beginning in 1977 that led to that nation's current Islamic republic in 1979. And perhaps the most important decolonizing revolution, the end of the South African apartheid in 1994, came about through a negotiated settlement, though there were periods of armed struggle and repression.

So the first lesson may be that not all protests succeed. Those that do usually involve other elements joining with the protesters to achieve an end. After all, the Egyptian army helped pave the way for the departure of the old regime there.

And that leads to the second lesson: Once an institution takes hold, it develops its own goals, often different from the ones of those who first took to the streets. Egypt is again a case in point; there, groups now want the army to step away from the political changes it helped foster.

If 2011 was the year of the protester, one can only wonder if 2012 will be the year of success or disappointment.