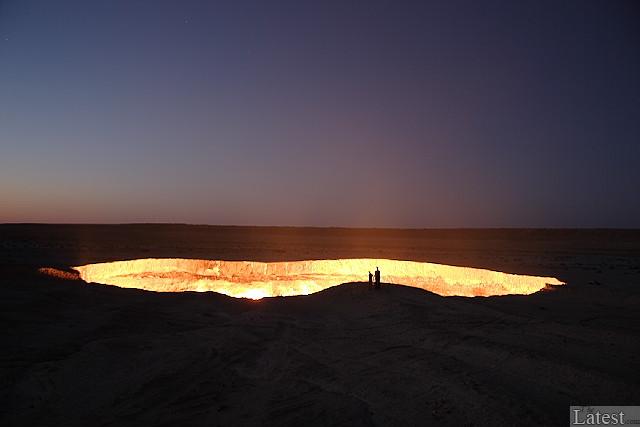 Thirty-five years ago, geologists searching for natural gas near Darvaza, Turkmenistan, stumbled upon a chamber filled with poisonous gas after their drilling equipment caused the ground around it to collapse. With their camps and equipment already established tens of meters below ground level and an extremely profitable resource at stake, securing the tunnel's safety seemed to be the only choice.

So, with no other option available, they decided to get rid of the poisonous threat once and for all … with fire.

And now, in 2008, the fires are still burning. Casting an eerie glow in the middle of an arid desert, the locals have named the crater  "The Door To Hell", and the picture supports the claim.

Nobody knows how many tons of gas have been wasted, but the flames have never showed any sign of dying down. If anything, they're burning brighter than ever.

And for all of the waste and idiocy surrounding its creation, the true beauty of the site has not been picked up on by any major news source. The internet, specifically English Russia which is dedicated to all areas of the former Soviet Union, has provided the images and video through a Russian contributor.

And as they quite rightly say:  "something cool happens daily on 1/6 of the Earth's surface".

Further images of the "Door to Hell" can be viewed here: http://englishrussia.com/?p=1830

Jeez, he can walk on water

'I blagged my way past security into Prime Minister's home'