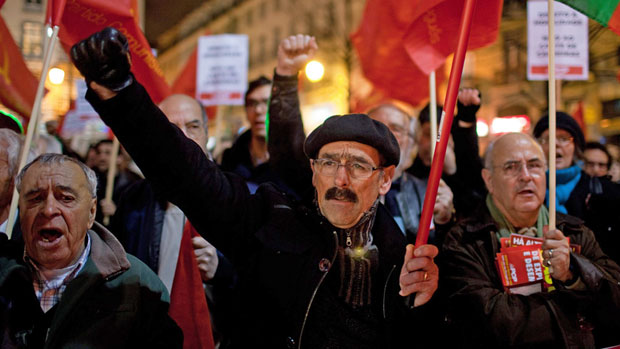 Austerity, austerity. That is all you hear about in the news here. The Portuguese have got so tired of the government's propoganda that says "amid this crisis, we have to make sacrifices”.

Recently, the country received the fourth tranche of a 78 billion rescue loan negotiated last year, which is good news for the Troika - the European commission, the European Central Bank (ECB) and the International Monetary Fund (IMF).

But the Portuguese continue to struggle with a set of tough austerity measures implemented by the centre-right government over the past 9 months, which means less money to spend on education, high taxes and steep pay and welfare cuts.

Portugal hasn’t been in the news as much as Greece even though they have suffered almost as much as each other. Perhaps this is because violence isn´t ingrained in the Portuguese culture, as you can observe immediately by attending any protest, which with a bunch of people waving flags looks more like a carnival than anything else.

However, the Portuguese are understandably becoming fed-up and even more pessimistic than usual. And I say this because the Portuguese are known for being tirelessly gloomy in outlook, explained in part by the deep-rooted “fado” culture. 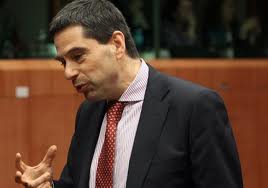 A gradual loss of wage competitiveness, low productivity and low export rates got Portugal to where it is now. The recession is expected to be the country's most severe slump since the 1970s, and despite Portuguese finance minister Vitor Gaspar insisting that Portugal is “on the right track,” unemployment will continue to rise further in 2013. The economic climate in this colourful country is undoubtedly grim as Portugal undergoes its highest unemployment rate since data was first compiled in the 1950s.

Portugal's jobless rate climbed to 14 percent at the end of 2011. Employment expert Professor Dr Mario Caldeira Dias points out that if the statistics took into account people who have given up their search for employment, the percentage could rise to an alarming 40 percent.

With a monthly minimum wage of 485 euros and lack of hope among the younger generation, it is likely that the country’s emigration figures will rise to between one and 1.5 million over the next ten years, according to Dias.

“The situation is dramatic”, Dias says. “Poverty levels in Portugal are rising. Families are losing their homes and cars.”

According to IMF projections, Portugal´s economy will shrink as much as Greece's and both will have almost identical current account deficits. But the idea that Portugal is similar to Greece outrages Portuguese politicians and differences between the two were well put in a speech by Minister of Foreign Affairs, Paulo Portas.

“Portugal has a majority government, Portugal has a social contract, Portugal met its fiscal target, Portugal is carrying out structural reforms. Portugal is reducing the budget”, he said, forgetting to mention that the Portuguese are also unlike Greece in that they, although resentful and despite the fact that a few people were detained, did not go as far as to smash stores or throw chunks of marble at police in anti - government demonstrations.

However, they have been persistent, with hundreds of thousands of people from across the country marching through the capital´s Praça do Comércio square last month. Union leader Arménio Carlos, who backed the protest, said in a speech that the Troika´s policies were “moving the country towards a precipice.” Following a meeting with the Troika bailout team, Carlos showed that he still disapproved strongly of the team, referring to them as “robots” and claiming that their sole intention was to benefit international markets, rather than to help Portugal. 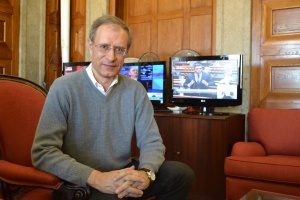 Socialist party Bloco Esquerda is putting its anti-Troika message across with visible red and white banners widely displayed in the city. One of them reads “Greek recipe is not the solution”.

As Portugal struggles to reduce its budget deficit to 3 percent of GDP by 2013 as previously agreed with the Troika, Bloco Esquerda leader Francisco Louçã says more emphasis should be placed on economic growth and employment, rather than impoverishing the Portuguese with more austerity measures. “It is necessary for Portugal to reject Troika´s plan and negotiate the debt,” he says.

Louçã’s view is opposite to that of Prime Minister Pedro Passos Coelho, who recently put forward his candidacy for re-election. He believes that although no further austerity measures are necessary, it was vital not to slow down the country's efforts.

It seems however, that the Portuguese are not willing to pay the price for having lived above their means for so long, and economist Bruno Proença, Executive Director of Diario Económico says the Portuguese are showing very little tolerance. “Troika's policies were inevitable because our economic model was on the verge of exploding,” he said. “The sentiment of revolt is going to worsen if the government doesn't get the opposition and syndicates on its side to go ahead with the reforms.”

However, the key question is whether it is ever right in a democracy to make cuts to vital areas of essential public services.