You must forward this story to five friends 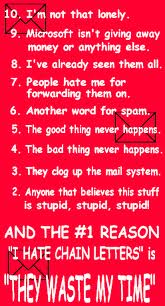 As new horror film Chain Letter, is released this month in the US and tells the story of a "a maniac who murders teens when they refuse to forward chain mail," writer Paul Collins describes the real history of the form.

Chain letters have a long, sordid past: "This prayer has been sent to you for good luck. The original copy came from the Netherlands. It has been around the world nine times. The luck has been sent to you. You are to receive good luck within nine days of receiving this letter. It is no joke. You will receive it in the mail. Send 20 copies of this letter to people you think need good luck. ... Zorin Barrachilli received the chain. Not believing it, he threw it away. Nine days later he died. For no reason whatsoever should this chain be broken."

Unlike the unfortunate Zorin Barrachilli, the chain letter lives on. If that 1974 sample from an online archive of chain letters sounds familiar, it's probably thanks to generations of email and photocopying. However, the real origin of the letter wasn't the Netherlands. Like any truly great crooked scheme, it began in Chicago.

It was there in 1888 that one of the earliest known chain letters came from a Methodist academy for women missionaries. Up to its eyes in debt, that summer the Chicago Training School hit upon the notion of the "peripatetic contribution box" - a missive which, in one founder's words, suggested that "each one receiving the letter would send us a dime and make three copies of the letter asking three friends to do the same thing."

The chain letter had been born.

The "peripatetic contribution box" was seized upon in Britain as a weapon against, of all people, Jack the Ripper. That November, the Bishop of Bedford oversaw a "snowball collection" to fund the Home for Destitute Women in Whitechapel, where crimes against prostitutes were raising an outcry for charitable relief.

The Bishop's snowball worked: Indeed, it worked diabolically well. It snowballed, so that along with 16,000 correctly addressed letters a week burying the hapless originator, garbled variants of the return address also piled upon the Bishop of Bangor - as well as Bradford and Brighton.

During the 1890s, chain-letter fundraising proliferated for everything from a bike path in Michigan to a consumptive railroad telegrapher; by July 1898, the New York World was pre-printing chain letter forms to fundraise for a memorial for Spanish-American War soldiers. ("Do not break the chain which will result in honouring the memory of the men who sacrificed their lives," it chided.) Upon seeing what the World's proprietor had wrought, his rivals at the New York Sun were blunt in their assessment: "Pulitzer is insane."

They had good reason to scoff. Earlier that year, a 17-year-old Red Cross volunteer in Long Island, Natalie Schenck, had contrived a chain to provide ice for troops in Cuba, causing 3,500 letters at a time to pour into the tiny post office of Babylon, New York. "We did not consider what patriotic Americans are capable of," the girl's mother fretted to the press.

Chains had taken on a life of their own.  Along with loopy "bad luck" and "good luck" imprecations to recipients, conmen used them to raise money for, among other things, a fictitious charity case in Las Vegas. But the best cons, as always, played on greed: Schemes like the "Self Help Mutual Advance Society" of London combined the exponential growth of chain letters with a pyramid-scheme payment structure.

Recipients were now told to mail dimes to previous senders while adding their name to a list that, enough links later, would bring the coins of subsequent generations showering down on them. One American chain-grifter was promptly immortalized in 1896 with the Chicago Tribune's sardonic headline: PLANS TO BECOME A TRILLIONAIRE.

This, of course, was the scheme's appeal: The exponential structure of a four-copy chain (four letters, then 16, then 64) meant that 20 rounds would generate 1,099,511,627,776 recipients. Or it would, at least, were it not for the inconvenient limitation of the earth's population.

Even a perfectly executed chain inevitably left its final "round" out of a great deal of money, and only the first few generations of participants were greatly enriched. By 1899, the US Postal Service had seen enough: It declared "dime letter" chains a violation of lottery laws and cracked down.

Chain letters have never gone away, of course. They made a comeback in World War I, when they were used by pro-German Americans during the neutral era "to send a substantial sum to Field Marshal Hindenburg"; by 1917, they were fingered by the New York Times as "a German plot ... to clog the United States mails."

A Jewish anti-Nazi chain letter circulated in 1933; and the invention of photocopiers and then e-mail have ensured a reliable afterlife for endlessly copied chains that threaten woe upon all who chuck them in the trash. The most cunning variant was the "Circle of Gold" scheme, which first propagated through parties in Marin County, California  in 1978; it skirted Postal Service enforcement by insisting that participants hand-deliver their letters.

But no chain-letter craze has ever quite topped the spring madness of 1935. Gutted by the Great Depression, Americans turned back to the allure of the "dime letter." After letters for a "Prosperity Club" came blossoming out of Denver, the city of Springfield, Missouri was seized with a mania for the idea. Chain letter "stores" sprung up in vacant storefronts selling official-looking "certificate" shares in high-ranked names on chain letters.

"Beauty shops," reported the AP, "sold the letters to their customers while administering facials and permanents." Emboldened by hazy laws governing their business, chain-letter brokerages appeared in a matter of days from Portland, Oregon  to Buffalo, New York, at its mad height, one chain-letter shop in Toledo, Ohio, boasted 125 employees.

The chains became such a cultural phenomenon that Paramount Studios announced plans for Chain Letter, a movie to star Fred MacMurray. Spoofs appeared in the mail, like the "Send-a-Packard" letter ("Think how nice it would be," it rhapsodised, "to have 15,625 automobiles").

Other letters promised fantastic exponential results in procuring dames, whiskey, and elephants. A few residents of Springfield even attempted a "drunk chain" - doubling their crowd in size with each round of highballs at a new tavern, while "the originators were hazily trying to figure out how long it would take to get the whole city drunk." Alas, they passed out before completing their calculations.

Soon the entire country had a hangover. The chain-letter market crashed after a few weeks, chain-letter brokers fled town with tens of thousands of dollars, and a $26.9 million suit was filed against Western Union for allowing the first electronic chains via telegraph. As dazed customers woke up to discover their investments were worthless, the US Postal Service was left in July 1935 with "between 2,000,000 and 3,000,000 letters in the dead letter offices."

It all has a curious ring of familiarity, which makes the earliest chain-letter fiascos all the more instructive. After all, what happened to Natalie Schenck, the teenager who nearly capsized her Long Island town with chain-letters for the Spanish-American War troops? The one who shook down a cascade of money, embarrassed a respected institution, and left government agencies tied up in knots?

Reader, need you even ask? She became a Wall Street banker.