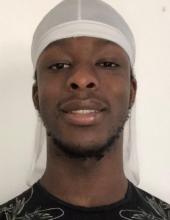 Because the police murder of Black American George Floyd was filmed by an unlikely teenaged citizen journalist it became the tipping point that sparked worldwide revulsion about state-sponsored racism, as young Black media graduate Marvin Williams reports from the protest frontline in Britain.

Just three months ago, the world’s biggest plague in a generation forced the people of London into lockdown.

Empty buses patrol silent streets while the wind rustles through the metallic shutters of the store fronts of deserted high street businesses. But, after a public lynching of a Black man by a white police officer in Minneapolis, USA, roads in the centre of the UK capital are have been rammed full again, despite government pleas for the public to stay at home to stop the spread of the killer corona virus. 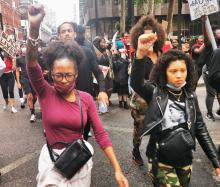 Led by fearless Black youth, hundreds of thousands of people have flocked to the streets to fight an even larger disease, which has plagued Western societies for centuries. Mostly masked, but not socially-distanced as the authorities have told them to be, they’ve marched to combat an inhumane, primitive infection, that has been perniciously inbred in both people and state.

So, what is this hundreds-year-old virus and why are we finally trying to do something about it? We should look no further than the stream of innocent Black lives stolen from grieving families by police with a licence to kill in the US, UK and elsewhere. Its name is RACISM and we finally have a developing cure: the global campaign whose rousing slogan is #BlackLivesMatter. It is a vaccination many newly-enlightened people are taking willingly. 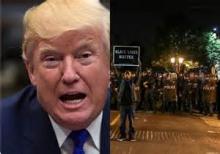 Still there are many people in power who refuse to accept the facts. US President Donald Trump is in denial, some people say because he’s the high priest of white supremacy. His sidekick in Britain, Prime Minister Boris Johnson is the same, like Trump, the latter threatening protestors with a militaristic crackdown.

Official survey after survey has revealed racism is real and it affects us everyday. 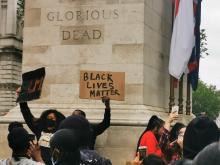 Yet you only have to open up one of the many social media apps to see the backlash to Black resistance to it - the ignorance ball of white privilege being kicked around in a vile attempt to hijack the #BLM hashtag. Sickening photos of people mockingly replicating the choke hold position used in the killing of 46-year-old George Floyd are on display.

But such bigotry has failed to stop the people’s heroic insurrection that has led at last to the badged murderers in uniform facing justice. It was only after large-scale riots in George Floyd’s Minneapolis hometown that officer Derek Chauvin, who put the full weight of his knee on George Floyd's neck while the security guard lay helpless on the ground for almost nine minutes, was arrested and taken into custody. Chauvin is one in a long line of many officers who have taken the law into their own hand in America and Britain, previously in the knowledge they would not be punished.

Thirteen Black people we know about have died at the hands of the police in Britain since 2010, but not a single officers has been prosecuted, despite inquest findings of unlawful killing. 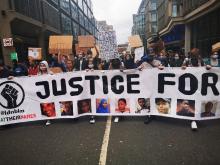 Now, because of George Floyd’s public execution, people of goodwill - Black and white - with their makeshift cardboard signs held high, have been getting their voices heard in the normally indifferent, if sometimes hostile, mainstream media. Politicians have had to sit up and read placards plastered with “Black Lives Matter”, “No Justice No Peace”, “White silence is violent”, “Britain is not innocent” and other defiant battle cries. 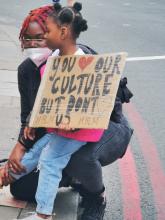 It was my first experience of being on a demonstration. As a young Black man,  I felt it important to show my support for a cause of deep importance to my people. 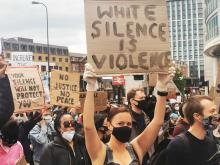 I went along with good friend Leon Thompson, who’s studying film production. We wanted to not just lend our solidarity but also document the protest and its passionate participants, to learn more about what people said they were fighting for.

While growing up, I experienced racism on several occasions, like other Black youth harassed by police. When I was 11, I was playfully chasing a white friend and got stopped by an officer who suspected I wanted to harm him. I don’t think they would have stopped us two youngsters had the roles been reversed. 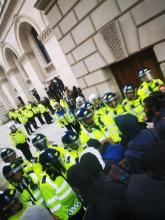 I’ve also been handcuffed by police for politely requesting they give me personal space when stopped by them for no reason, an experience so many of my young Black male friends say is all too familiar. It causes great resentment among them towards the “feds”, as the police are called by us, and a profound pent-up sense of grievance that found an outlet in the protests.

This perhaps explains why so many young people have turned out day after day for the justice for George Floyd London demonstrations in a way they would not have dreamed of for demos by white-run outfits like Stand Up to Racism. 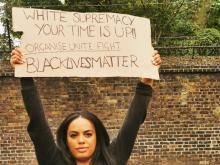 On the demo I attended with Leon, the atmosphere was ecstatic. Seeing all the people who had come out in miserable weather to support the movement energised us both in a way we’d had never experienced before.

Booming megaphone-amplified chants echoed through the crowd. There was an invigorating atmosphere as people from all backgrounds engaged in a lively, united protest.

What originally started at Parliament Square, London, soon reached Vauxhall, on the south side of a River Thames bridge we crossed, to stop outside the US embassy, where we met Marc Wadsworth, the editor of the-latest.com, who asked me to write this piece.

Speakers took to higher-ground vantage points to preach their messages of the need for change to the assembled masses, rewarded with loud cheering for wise words.

“Please, I don’t want to have to bury my son”, said one Black woman protester, megaphone in hand. “This needs to end. We need to make it end”, she added.

“We can’t leave it here”, said another inspired speaker. “After all this, we need to make it a lifestyle and keep it up”, she continued.

It was a sentiment summed up in the message on a placard: “This is a movement, not a moment.”

Apart from George Floyd’s, other names too have been on the lips of protesters, in particular that of Breonna Taylor, a US health worker shot eight times by police who entered her apartment in Louisville, Kentucky on March 13, searching for non-existent drugs. Protesters called out "say her name" the same as they did for iconic George Floyd.

The protest was overwhelmingly good-natured and peaceful. People on it handed out bottles of water, sandwiches, sausage rolls, biscuits and other welcome items of sustenance.

After a few isolated skirmishes between wound-up youth and tooled-up police, spoiling to show who was boss on the streets, some establishment sections of the media gave the otherwise peaceful protest bad headlines. Videos of anarchist behaviour have flooded social media, in an organised attempt to undermine the good that the worldwide demonstrations against racism in all its forms have achieved. 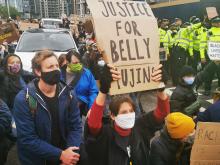 A great deal of progress has come about nonetheless. Such as the reopening of the investigation into the death of 48-year-old Black rail station ticket office worker Belly Mujinga, who died in April from covid-19, a few weeks after being spat on by a white man who told her he had the virus.

In the US, fired officer Chauvin’s third-degree murder charge has been raised to second degree and the three other sacked officers involved in the incident that left George Floyd dead have been charged with offences to do with his death.

While these developments are a good start, they are surely not enough to make up for all the suffering endured by Black people since our enslavement 400 years ago. Anti-racist people of the world need to continue to fight the evil pandemic that has claimed more lives than covid-19.

*Marvin Williams is a 23-year-old journalism and media communications graduate who is passionate about social and economic affairs.